Despite its name, the greenish-yellow grass snake, commonly called green whip snake (Hierophis viridiflavus, formerly Coluber viridiflavus) does not have a single green scale. Its shell is nevertheless very unusual with its yellow and black colours which makes it one of our most beautiful snakes as you will easily agree. 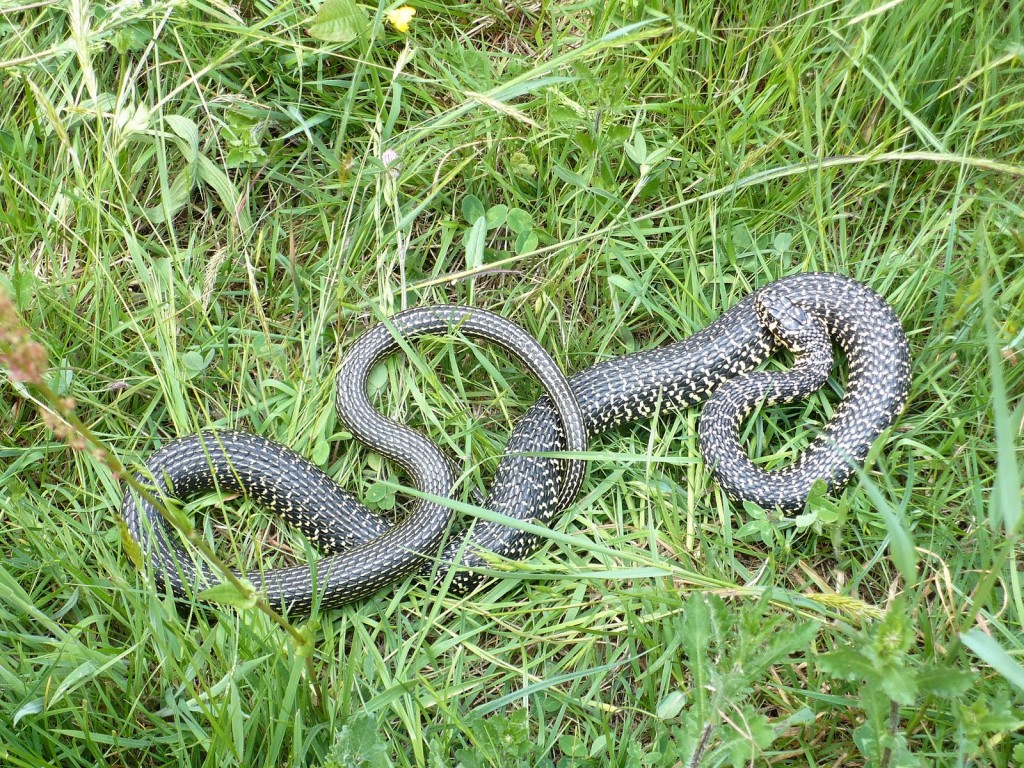 With such colour, this large grass snake can reach up to 1,50 meters and is easily recognizable by its flank patterns close to the head, alternating yellow and black scales crosswards first and gradually going lengthwise as we get nearer to its tail. 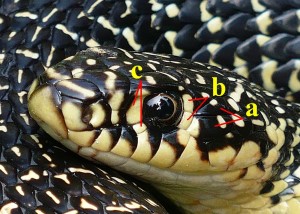 And if you come across a moult, you can always try the head scales 2 temporal ( a) 2 post ocular ( b) and 2 pre ocular 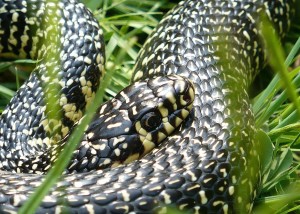 The piercing stare of the green whip snake (Coutières, Deux-Sèvres)

More robust than the Aesculapian snake, the green whip snake is known to feed on small rodents and other reptiles in addition. They are mainly lizards (young green lizards, slow worms) and occasionally on smaller snakes like the aspic adder.
When hunting, the grass snake doesn’t stalk its preys by its sense of sight (hampered by grass) or hearing (as it is deprived of an external ear, snakes are only sensitive to very low frequencies, they are almost deaf ) but by its extremely developed sense of taste called vomeronasal which we as humans are deprived of: the forked tongue it whips out regularly captures air molecules which are then analysed by the Jacobson’s organ ( called vomeronasal) located in the palate thus detecting the presence of pheronomes, the latter allowing it to identify his lunch accurately or its sexual partner. 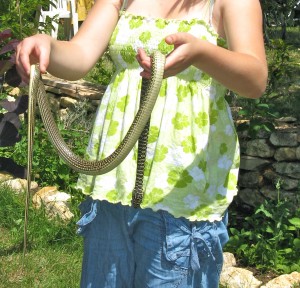 Despite its Greek genus name Hierophis meaning « holy snake, it is not more spared on roads than other reptiles by car drivers, involuntary predators, much more harmful than the snake eagle ! So dear friend drivers, if you don’t want your wheels to destroy such a beautiful animal which happens to be an indispensable part of the ecological machine, be careful on countryside roads and do not hesitate to brake.. if you see it cross the road
(extrait de http://nature-en-image.blogspot.com/2011/07/couleuvre-verte-et-jaune.html)